Judy Johnson is a survivor of early stage breast cancer – a diagnosis that changed her life and her livelihood, moving her from career consultant to clinical trials study coordinator.

“After my diagnosis, I wanted to understand everything about cancer and treatment so I got involved with Susan G. Komen and joined an IRB,” she said. “How patients are engaged in their treatment, and the science behind their care, is what interests me. I never wanted to be the kind of advocate who answered patients’ questions or held their hands and provided emotional support. Touchy-feely isn’t me. I wanted to work on the research.”

In 2008, Johnson was overseeing lung trials at Siteman Cancer Center, part of the Washington University Medical Center campus in her hometown of St. Louis, MO. She got a call. Her 79-yer-old dad, who had a persistent cough, had gone in for a chest X-ray. She shared the film with a few experts.

“I knew right away it wasn’t good,” she said. Her father had stage IV non-small cell lung cancer. Nine months later, he died.

Her father’s death fueled her passion for lung cancer advocacy. Back in 2008, before immunotherapies and targeted drugs, there were so few lung cancer treatment options that the diagnosis was often a death sentence. In late 2015, she saw an opening for a SWOG lung advocate on the Patient Advocates in Research listserv. She emailed the SWOG chair, Rick Bangs, and applied. Now Judy Johnson has been with us for four years – and she’s made a huge mark on our lung committee, and on SWOG.

Johnson serves on the team for Lung-MAP, our precision medicine trial, and is part of the SWOG lung committee’s community engagement team, which fosters greater engagement with community-based members. With strong support from lung committee Chair Dr. Karen Kelly, Judy is now an active voice in the group, routinely weighing in on eligibility criteria, informed consent language, treatment plans, and accrual enhancement strategies for a slew of studies, including S1701, S1914, and S1827.

One of the reasons Judy has gained her colleagues’ respect is her honesty. She tactfully yet plainly speaks the truth about a protocol from the perspective of patients. I know this well. She personally lobbied me to support a trial name when it was perceived to be non-neutral. Together with the PI, we arrived at a name that worked. Judy’s practical, direct approach has earned her a spot on the scientific advisory board of SWOG Clinical Trials Partnerships, the independent limited liability corporation that runs industry trials, and the advisory team for S1415CD, our cancer care delivery trial examining the use of colony stimulating factors to treat breast, colorectal, and lung cancers.

The National Cancer Institute has also recognized Judy’s expertise and leadership. In July 2020, she received an invitation she’d long hoped for – an offer to join the NCI’s Thoracic Malignancy Steering Committee, which evaluates and prioritizes trial concepts conducted through the NCTN and the NCORP.

“When I got that email, I thought: ‘Dad, I did it!’ And I knew he was looking down at me from above, doing a happy dance, and saying ‘You go, girl!’ And it feels great. I’m really doing what I want to do.” 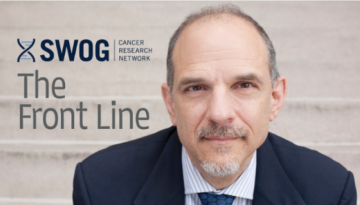 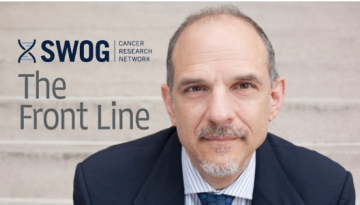